When on stock we ship the same day if ordered before 16:00 Rocketmotors have special shipping! 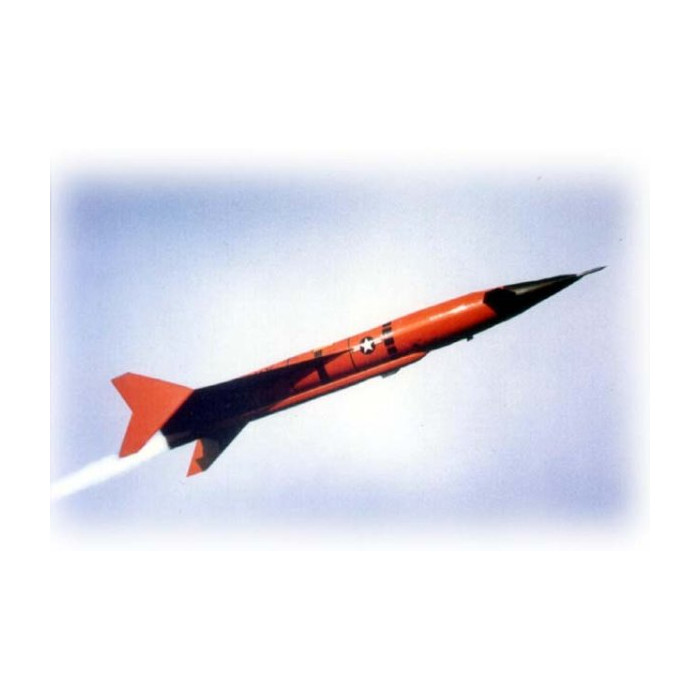 When on stock we ship the same day if ordered before 16:00 Rocketmotors have special shipping!

The AQM-37A is a Navy-developed, preprogrammed, liquid-rocket-propelled, air-launched, supersonic, nonrecoverable target. The AQM-37 has external command and control capabilities which can be used as an aerial target to test new and operational ship defense weapon systems. There have been over 1,000 flights of the U.S. Navy AQM-37C model, worldwide since 1982. The current manufacturer, Raytheon Aircraft Corporation, has had a reliability rate of 97 percent of the targets used since 1994 and has delivered over 5,000 AQM-37 units to the U.S. Navy since 1962.

The AQM-37 air launched target is used by the US Navy and NATO nations. The target missile was initially developed in 1962, and has been continually updated for improved performance. The current version flies at altitudes ranging from 1,000 feet above the surface to 100,000 feet at speeds up to Mach 4.0. The AQM-37, with special software has flown simulated ballistic missile profiles at altitudes of up to 300,000 feet.

The target missile includes a digital autopilot, a telemetry system for flight evaluation and a command/control system allowing lateral maneuvers for course correction as well as dives and pull-ups to simulate missile threats. The target provides weapons training and weapons development and evaluation for the DoD and NATO countries.

The assembled target is approximately 4.3 meters (14 feet) long and 0.3 meters (13 inches) in diameter, with a wing span of 1 meters (3.3 feet). The target weighs 281 kilograms (620 pounds) when flight-ready. The target incorporates a UHF receiver/decoder for command and control and a telemetry transmitter for target performance data. The target is capable of being launched from the aircraft at altitudes between 300 and 18,000 meters (1,000 and 60,000 feet) and at speeds between 835 to 2,150 kilometers per hour (Mach 0.7 to 1.8).

The pre-fueled target has a self-contained hypergolic propellant system consisting of MAF-4 and IRFNA as an oxidizer. During final assembly, the target is pressurized to 232 ± 3.5 kilograms per square centimeter (ksc) (3,300 ± 50 pounds per square inch (psi)) with nitrogen gas. Upon launch, the pressurized gas forces the oxidizer and the fuel into the thrusters. Each target has a Net Explosive Weight (NEW) of 13 kilograms (29 pounds).

All AQM-37 targets are equipped with an aerodynamic destruct, flight termination device. The aileron linkage is separated from the actuator by a small explosive cartridge, allowing a spring to drive the ailerons to their physical limit (about 30 degrees) in a left-roll direction. The AQM-37 then enters a continuous, rapid left roll, nulling the lift force, and follows a ballistic trajectory descent. If the rocket motor is burning at the time the destruct command is given, thrust is terminated due to propellant starvation of the motor. Rapidly-changing acceleration would displace the propellant inside the tanks causing loss of thrust. The ensuing deceleration usually maintains propellant towards the forward part of the tanks, preventing engine restart.

The distance traveled downrange is primarily a function of the target’s speed and altitude at the time the destruct command is initiated. Based upon historic performance, the AQM-37 is most likely to impact the surface slightly left of its course. At the initiation of destruct, the target translates its angle of attack into sideslip, creating a nose-left movement that influences its overall trajectory during descent.

Historical cost data was provided by Beech Aircraft Corporation, producer of the AQM-37A. Historical cost data for a quantity of 415 units yielded an average unit production lot cost of $14,325 in FY 77 dollars. A total of 3300 units have been manufactured prior to this production lot; therefore, this lot represented units 3301 through 3715. Utilizing this data and an assumed learning slope of 87.4 percent, the average unit production cost of $24,257 was calculated for the first 700 units.

No customer reviews for the moment. 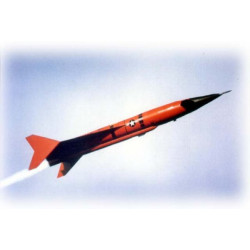